Operating delicate technical systems and scientific instrumentation in the harsh Arctic environment has been signatory for FMI over 100 years.

Utilization, calibration and validation of Earth Observation satellites and development of space technology.

Bringing remote sensing data and services in every day, to everybody, for every use.

Bringing remote sensing data and services in every day, to everybody, for every use 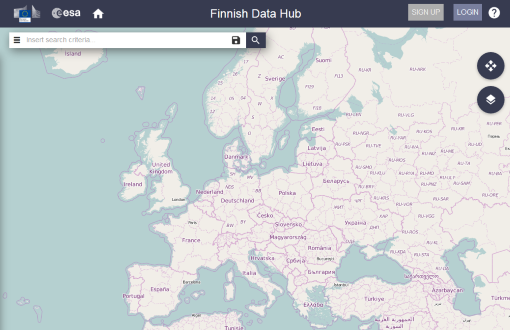 COSMO-SkyMed
The COSMO-SkyMed system is a constellation of four radar satellites for Earth Observation. The resolution syntheric aperture radar sensors to observe the Earth day and night, regardless of weather conditions.

Together with new antenna, FMI operated NSDC, updated their antenna control software. The new control software is able to control and schedule multiple antennas from one GUI and resolve conflicts in case of overlapping satellites. The control software update was purchased from Kongsberg Spacetec, which equipment and software was already on-site. The design and defining of the functionalities were made in close collaboration between NSDC and Spacetec.
The new multi-mission control software is able to control 16 antennas and 16 outputs (demodulators) in total. Data flow from any antenna can be routed to any output with the help of IF switch matrix. "Even we'd lose temporary one component, we could still fully operate our daily actions by just re-routing the data to another source", says Timo Ryyppö, Head of Satellites and Observation Operations.
Two large scale antennas with flexible control software enhances the operational capabilities of NSDC. In case of maintenance or unexpected disturbance, NSDC can still receive satellite data. In addition, the S-band uplink in new antenna gives NSDC to provide telemetry, tracking and communication services to satellite operators.

On April 5th 2017 the extension of the FMI's Arctic Satellite Centre at Sodankylä will be officially inaugurated. Arctic Space Centre of the Finnish Meteorological Institute (FMI-ASC) in Sodankylä incorporates the main space infrastructure of Finland. The focus is on the utilization, calibration and validation of Earth Observation (EO) satellites. This includes direct data reception from polar orbiting EO satellites, processing and archiving of satellite data products, and the housing of satellite instrument's ground-based reference systems. Operational units of FMI apply Arctic Space Centre's data and products for supporting sea ice navigation in the Baltic Sea and for safety related monitoring and warnings e.g. aviation control in cases of volcanic eruptions and flood monitoring and space weather monitoring. The co-operative partners and funding agencies of FMI-ASC and NSDC include international space agencies (ESA, EUMETSAT, NASA, NOAA), European Union and national agencies and research institutes, such as the Finnish Environment Institute (SYKE).